Last week I was up in Lancaster for a training course for work, and as I had not yet been away from London I thought I would stay up north for a weekend and see what country life is like 🙂

The only place near Lancaster that I could find was in a little hamlet called Kent Bank, right near Grange-Over-Sands. I stayed in a place called Abbot Hall Hotel, which was kind of like being back at recruits, except this place was full of elderly people. 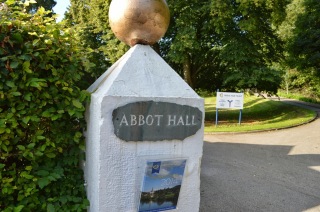 Which isn’t bad, but one lady kept mistaking me for some chick called Suzie. Even when I told her I wasn’t Suzie, she kept asking me questions about her. It was kinda cute though.

On the Saturday I hired a bike from Silverdale Bicycle Hire and decided to try and bike the 3 or so miles to a little town called Cartmel.

They have a middle Ages priory that was pretty cool to check out, the floor was made out of tombstones which was pretty interesting, and it had a pretty awesome stained glass window.

Cartmel was a pretty little place. The day I was there they were holding a Antique Fair, which was pretty cool, I bought a turquoise brooch for my cousin as a wedding present.

After much scurrying around the village, looking at the 5 different pubs that were in the main square, I decided on the Royal Oak for lunch.

The soup of the day was a Carrot and Orange, which I thought was extremely weird, but decided to try it out, and it was THE. MOST. AMAZING. THING. EVER. I have included a recipe for it, which I am hoping to try out sooner rather than later. Maybe you might get lucky Mum and I’ll make it when I’m home! (jsut as long as it doesn’t turn out the way of the chicken soup fiasco…)

On my way out of the town I stopped by the local Cartmel Cheese Shop, and got a sliver of cheddar and half a round of camembert and crackers for dinner. 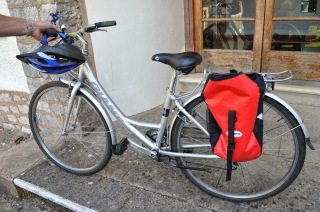 This was my trusty stead for the day. Unfortunately for me, it seemed that I spent more time pushing the damn thing up the hills then riding it. By the end of the day I was totally buggered!