Skip to content
On the 3rd July the British Summer Time Festival kicked of in Hyde Park. The festival goes over 7 days and features a variety of amazing musical talent.
As the Tuesday previous was payday, me and my roommate decided it would be worth it to splash our cash on tickets to the Sunday and relive our childhood with Backstreet Boys and Five!
Thanks to amazing friends of my boyfriend’s I also got to go on the opening night (for the low ticketed price of £2.50) and see Jake Bugg and Arcade Fire. Even though I had no idea who they were they were pretty damn good live. Although young Jake could up his game on the interaction front. Not once did he even talk to the crowd.
As I mentioned, I haven’t heard any of Arcade Fire’s songs, so judging by the name I thought they might be a bit of a rock band. Turns out they’re more country/mellow style.
The festival itself offered many attractions besides the music. There were many food stalls – a lot even offering gluten free options – as well as rides like a ferris wheel and this swing chair thing.

One way to judge a festival is by the toilets. British Summer Time delivered! It was like the Ritz of portaloos, although the toilet paper needed to be stocked up more often.

The facades of the bars looked a cross between a scene from a wild west movie and the colours of Cinque Terre in Italy.

Sunday turned out to be a lovely day, if a bit Melbourne-like in weather (4 seasons in one day). Brenna, Cara and I had a look-see around before plonking ourselves down in front of one of the big screens showing the main stage – we were fully prepared with Cara’s picnic rug.
The first act on the main stage was Diversity. For those back home, they are pretty much the British version of Justice Crew. 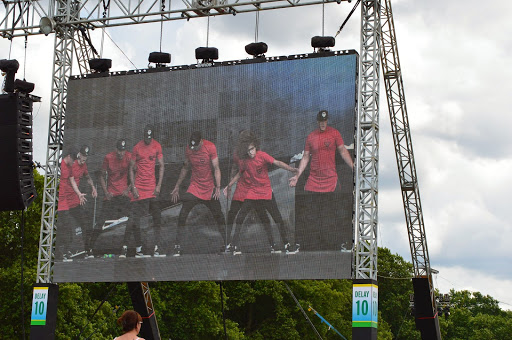 The next act was another one I had never heard of – Scouting For Girls.

The third final act was The Vamps, one of Cara’s favourite bands. They had some pretty good tunes that were easy to sing along to.

In between sets the festival had Carnival. This consisted of people dressed up in costumes and dancing to Caribbean music. 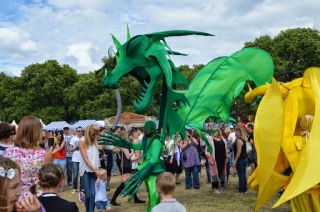 About 6pm Bree and I set off to find out where 5 were playing. There are about 5 different stages set up in the festival and unfortunately the one we wanted was closed for the day! Even more upsetting – Five had cancelled!
Luckily Cara had stayed at our spot and we were in a great place to view The Backstreet Boys when they came on the main stage half hour later.
As they started playing, the crowd came from way back to rush to the front of the stage. Everybody was on their feet dancing and singing. (Please mind the singing – I am a wee bit tone deaf!)
//www.youtube.com/get_player
About halfway into their set the heavens opened and we got absolutely saturated with rain. Clothes plastered to your body saturated. Even with an umbrella. Didn’t stop everybody from rocking out to their favourite hits from the 90s.
After the Backstreet Boys had played their last song (back streets back, alright!) we decided to pack it in and miss out on McBusted. I just wanted a nice steaming hot shower and some dry clothes.
It was an amazing day out with some good friends and well worth the £54.95 the tickets set us back.