A couple of weeks ago I went and visited my mate Ben (previously featured in the kitesurfing post) down in Nottingham. I came from work in the Yorkshire Dales and had a bit of FOMO because my boss had been to a great tasting menu dinner and was raving about it. I wanted that, so I did some research on fine dining in Nottingham and convinced Ben we should go to Alchemilla (it didn’t take much convincing). We also invited Ben’s mate Rob – he’s coming kitesurfing with us in September – and we booked around a week in advance. Luckily they had availability during my stay. We had to give about 3 days notice for dietary requirements and 24 hours for disabled access (you can kind of see the ramp in the background of this photo).

We had a late booking of 8.30pm as originally we had more people coming from work, but it turned out to be just the 3 of us so we wasted a bit of time in a local pub (The Overdraught) before heading to Alchemilla.

Located on Derby Road, we nearly missed it as we walked past, the only signage is on the wall next to the door, which makes it quite inconspicuous. We arrived a little bit early, but our table was ready and they had already removed the third chair for Ben AND his chair (and legs) fit nicely under the table. There was about 7 steps in two flights from the entrance down to the dining area, half of which was covered with a ramp for Ben. It’s in a basement with lots of upper windows and skylights, and there is a lot of greenery and subtle lightening brightening up what could have been a dull area.

We ordered our pre dinner cocktails and then had to decide which course option to choose. Alchemilla offer 5, 7 or 10 course tasting menus. Ben and I had decided to do the wine pairing, Rob was driving and we all decided it was a choice between the 7 and 10. We gave our fate to the flip of a 20p – obviously heads was for the 10 (Queen Liz being the representation of all things exxy) and tails for the seven. Heads it was! We put in our order and the sommelier was over with our first course wine pairing.

The sommelier was amazing with the amount of detail provided about the wines – down to the family stories for some of them.

Expecting the next thing out to our table to be the first course, we were surprised when a starter came out. Followed by another starter. Followed by a third starter!

I’m going to do this a disservice because I’m going by memory and didn’t take any notes as to what these starters actually included.

The first starter seemed to be homemade potato crisps dotted with emulsion of mayo and possibly aoili. I’ve always been terrible at identifying fresh herbs but I think it was topped with chives. (Actually I’ve just googled chives, it definitely wasn’t them, maybe it was dill?). Anyway this was a delicious combination and we may have been licking up the dropped sauce from the plate – in a highly graceful way of course.

The second starter was a light puff pastry – I asked three times if these were gluten free, that’s how good they were! The boys and I can’t remember what was in these but they were a bit flaky and I have a vague recollection that it may have involved mushrooms (it probably didn’t).

The third starter was my least favourite, mainly because I’m not a fan of parmesan cheese, but here it was paired with the equally as strong flavour of seaweed.

Next out came the bread! After the amazing gluten free pastries I was a little disappointed in the bread. It had more of a cake texture than bread, but it did pair well with the butter and green dip thing. I got my own butter and pesto so it wasn’t contaminated by the boys’ bread, and I wasn’t sharing! 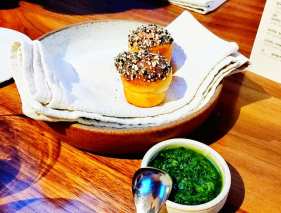 On to the first course! 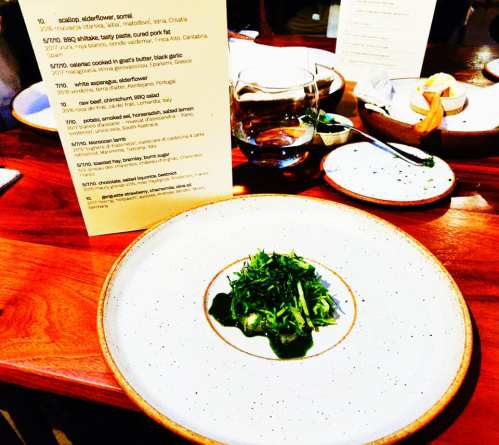 Paired with a 2016 malvazija istarska from Croatia

I really wish I took notes on how everything tasted! From memory I couldn’t really taste the elderflower (it’s not something I normally have so may not have been able to tell the flavour anyway). The scallops were out of their homes and easy to eat. 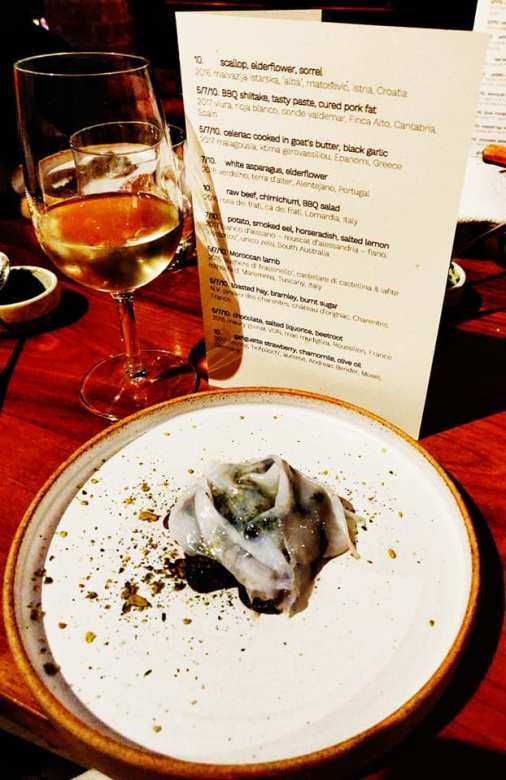 This was probably one of my most anticipated dishes as I love mushrooms, and probably the most unappealing lookswise. We were told what the tasty paste was made from but I can’t remember. The taste of the whole dish together was very strong though.

Anything smothered in butter is a win from me! Added bonus of garlic? First prize everytime! The celeriac was cooked to perfection and didn’t have that crunch that it has when I try and cook it (I know, patience Rachael, cook it longer!)

This was the first dish where I had a bit of a variation from the boys ‘normal’ menu (I believe they had roasted yeast with theirs) on both the dish and the wine pairing. I didn’t even know there were different colours of asparagus! But I do think it is a very under appreciated vegetable.

*side note – you may have noticed the splotch on the menu – I got a bit excited with my bread dipping sauce and it went everywhere. Luckily it wasn’t too much of a mess!

Raw beef isn’t something that you would think you would want to eat but it was super delicious and kind of just dissolved in your mouth and it absorbed the chimichurri well. I do not recommend eating it at home though, unless you know what you’re doing. I was surprised beef was paired with a white wine, but as some of my old hospo colleagues will tell you – I know nothing about wine!

So this looks a bit like green eggs, but that’s because it came out as just the potato and smoked eel cake, and the waiters had the horseradish to pour over at the table. I got one whiff of this sauce and made the waiter pour the whole pot onto my plate! (My boss might be surprised by this as I actually do not like horseradish). The horseradish was a subtle flavour which really went well with the potato an scallop cake.

on to the main!

This is where the menu differed once again. The boys had the option of this delicious lamb or a choice of duck, morels and peppercorn sauce. I’m not sure if the Moroccan part of the dish was imported lamb or for that little square nut thing.

After the main we were then asked if we would like the cheese platter. Me, not being versed in fine dining thought the cheese platter came after the meal. Nope! It’s a after mains/before dessert deal here.  – Also, it’s always a yes to cheese.

Sorry you can’t really see the cheese menu – it was Francis (wash rind), White Nancy and Baron Bigod. We all got our own cheese plates! Those who know me how much I love cheese so I was loving this! No sharing! (I’m also not big on sharing – mainly because gluten free food is ten billion times more expensive and I’m the one buying it – hello stingy life!)

By this stage, we’re seven glasses of wine, one pre dinner cocktail and two pints down so my descriptions are getting worse. Ok, let’s be honest, they were pretty poor from the beginning, but all our plates were pretty much licked clean. 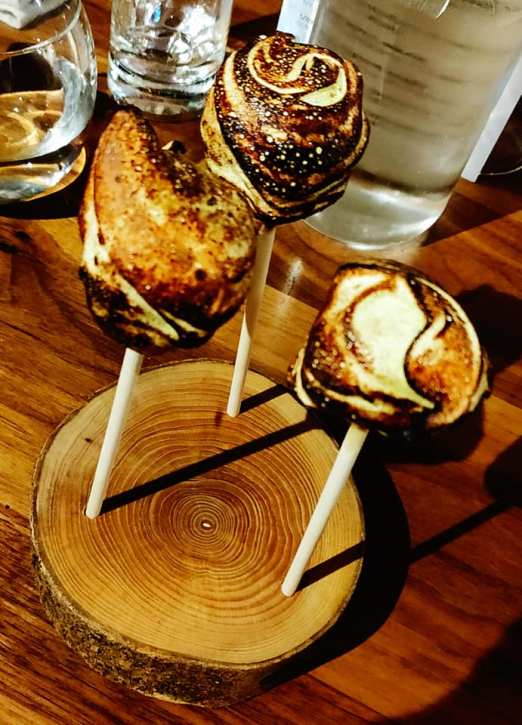 I’ve no idea what this was, but it tasted a bit like marshmallow with a gooey centre. I was super disappointed when I bit into mine and half of it fell to the floor though. 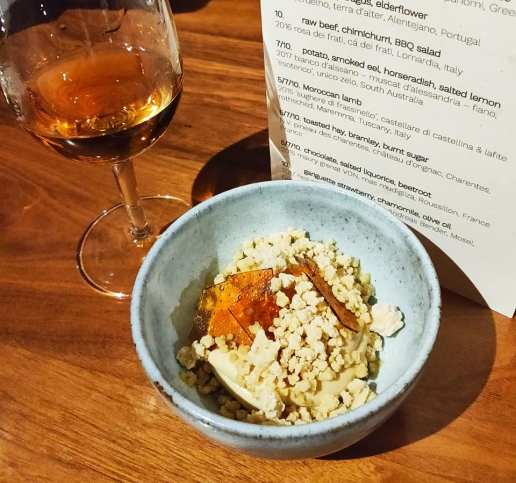 GIVE. ME. ALL. OF. THIS. It didn’t click to me when I read the menu, but this was basically just a fancy bowl of apple crumble. You know who loves crumble? THIS GIRL! This was by far my favourite dish out of all of them. 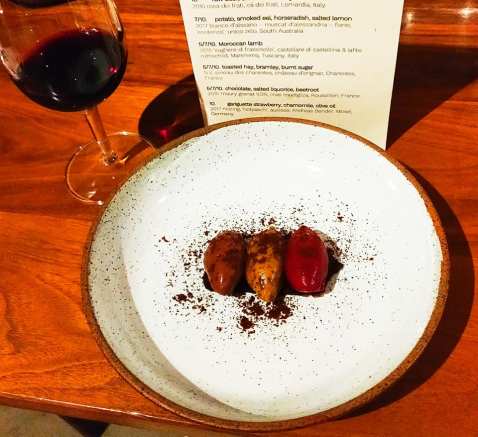 I am not a fan of either liquorice or beetroot (unless it comes in a can) so this was my least favourite dish of the lot. I ate it all though – you can’t get the next course unless you clear your plate!*

Luckily for me, this was not the last dish so I had something to clean that gross liquorice taste out with (besides the wine). 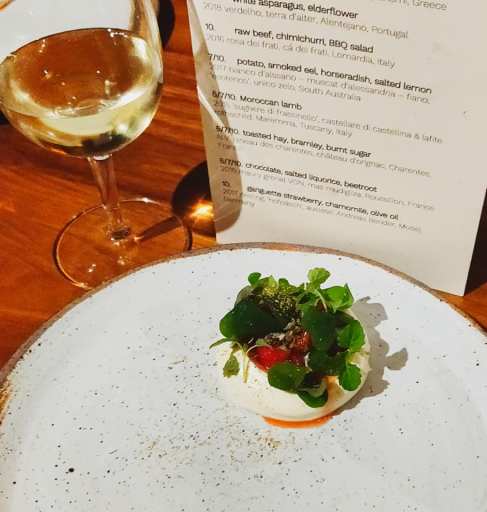 Mmmm, how can you go wrong with strawberries? Strawberries with cream?

We were the last people left in the restaurant by now and some of the staff had gone home, so we paid up and Sober Rob was nice enough to give me and Ben a lift back home. Four hours of delicious food, great wine and better company is a great way to spend a Wednesday night. I won’t post the bill (it’s a shocker!) but prices can be found on the Alchemilla website. As well as the ‘normal’ menu, they also have the gluten free menu (all the photos above are from the gluten free menu, May 2019), a vegetarian menu and a vegan menu.

<All photos are my own, taken with the OnePlus 6T mobile edited on the phone editor. >

2 thoughts on “Dinner at Alchemilla”